Snow is falling and you want some high speed fun with a sledge or toboggan. This amazing wax will make any sledge run faster, but you have to use the right type.
I have lots of tips learned from years of first hand experience that will help you to have the best time sledging. Find out what makes a good sledge, how to make your sledge go faster, how to steer, and what the best alternative things are that you can use as a sledge. You will also want to know where to buy the best selection of sledges.

How does a sledge work?

A sledge works by sliding over the snow, being pulled downhill by the force of gravity. The reason a sledge slides on snow is due to the low friction between the sledge and the snow. Friction stops things sliding. Sledges with thin runners, such as wooden sledges, are much better at sliding because the pressure of your weight in a very small area (the runners on the ground instead of the entire bottom of a plastic sledge) melts the snow a bit which creates a very thin layer of water between the runner and the snow. This really reduces the friction, and makes you go much faster. It is the same way that ice skates work.
Inflatable sledges work in the same way, but are also made from a low friction material which makes the sledge moves faster on the snow. 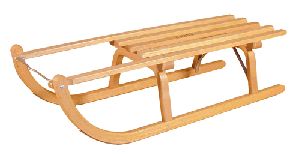 Choosing a Sledge or Toboggan

There are is a huge range of sledges and toboggans available. There are:

[amazon_link asins=’B004C988WC’ template=’ActiveOutdoors-ProductAd’ store=’activoutdo-21′ marketplace=’UK’ link_id=’7b48e3b5-c541-11e7-afb0-4f685c2ce4a0′]
Wooden sledges come in two main designs. the most common one is one with runners that keep the main deck about a foot above the ground. These types of wooden sledges are great where the snow is deep. The runners cut through the snow down to the more compact snow near the ground.

The second main design for wooden sledges is a flat sheet of wood that curls up at the front. This works very well on compact snow, and can hold several people.

[amazon_link asins=’B00GYVT820′ template=’ActiveOutdoors-ProductAd’ store=’activoutdo-21′ marketplace=’UK’ link_id=’91fa3b3d-c800-11e7-99fe-d95a868663be’]
Plastic sledges usually have a flat bottom, or slight ridges to act as runners to keep it going in a straight line. They require compact snow to work. you may have to sit on your plastic sledge and push yourself down the slope several times before the snow is compact enough to get you some speed.

One of the challenges of plastic sedges is the steering. To steer a plastic sledge you either have to use your feet hanging over the sides to dig into the snow, or you can not worry about holding onto the sledge rope and use your hands. You could always just see where the hill takes you, but trees can sometimes be a bit of a nuisance.

[amazon_link asins=’B004I5GEV2′ template=’ActiveOutdoors-ProductAd’ store=’activoutdo-21′ marketplace=’UK’ link_id=’18ffcff5-c801-11e7-9099-bfc6fb5e81ca’]
So, it just so happens that you can buy a [amazon_link asins=’B004I5GEV2′ template=’AOProductLink’ store=’activoutdo-21′ marketplace=’UK’ link_id=’a8a16049-c801-11e7-94da-7317cb258be3′] that you can use to control and steer. All you have to do is to hold onto the black levers on each side of the sledge. By pulling up the lever on the right it digs the right brake into the snow and you turn right. Same for the left brake on the sledge.
These sledges with brakes are brilliant because it means that you don’t end up with a face full of snow where you have dug your heels into the snow to steer your sledge.

[amazon_link asins=’B004MC8H7U’ template=’ActiveOutdoors-ProductAd’ store=’activoutdo-21′ marketplace=’UK’ link_id=’b4625a48-c541-11e7-b81b-69a76a08ed83′]
There has been a recent revolution in sledging, and that is the Airboard. An airboard is an inflatable sledge used in a similar way as a bodyboard used for surfing. The airboard is inflatable and has hard ridges on the bottom to keep it sledging in a straight line. You lie down on it on your stomach and hold onto the handles on either side. It is extremely lightweight and easy to carry back up the hill, and you can reach speeds of up to 80mph if the slope is right.

For more information on airboards, read my article and watch amazing videos of extreme downhill airboarding.

[amazon_link asins=’B0062ZBNX0′ template=’ActiveOutdoors-ProductAd’ store=’activoutdo-21′ marketplace=’UK’ link_id=’1148f32a-c803-11e7-b3de-5d6a756961c7′]
Pan sledges are the most compact and easiest to carry back up the hill. Trust me, your kids will very soon get fed up of having to walk back up the hill. These look like a frying pan, with a round disc shape that you sit on whilst holding onto the handle. They aren’t as quick as wooden, plastic or inflatable sledges, but are good fun for smaller children.

It is very easy to bail out if it gets too fast for them. Adults will find them a challenge, and they make your back ache after a while because you have to lean back to lift your feet up.

I have used candle wax on the runners of a sledge to make it go faster. Unfortunately, this doesn’t work. Normal candle wax increases the friction and will slow your sledge down. You can reduce the friction further by using ski and snowboard wax

. Ski wax is specially designed to reduce the friction and will make your sledge go really fast. I usually keep a Zardoz Not Wax Pocket Puck

in my pocket when snowboarding and sledging. This stuff is liquid Teflon, the same stuff used to make frying pans non-stick. Works great on sledge runners.

What Other Things Can I use to go Sledging and Tobogganing?

There are lots of things you can use as a sledge or toboggan. The obvious choice is a traditional wooden sledge. With high runners, they are great for use in deep snow.

If you have a plastic sledge, you will need to use it on more compact snow. This may take a few runs down the slope to get the snow firm enough to get some decent speed.

You can even get inflatables sledges. But if you can’t get hold of a sledge or toboggan, don’t worry as there are plenty of other things to use as a sledge.

Wooden skim boards are good for sledging as the curled up front enables you to surf over the snow. The board also takes out some of the bumps on your bottom. Bodyboards do not make good sledges. But if you put them inside an empty compost bag they work a treat.

Other things you can use for sledges are tin trays, canoes, large inner tubes or inflatable rings used in the swimming pool. An inflatable dinghy works very well, but watch out for any sharp things in the snow that could burst it. If you want the real things, then get yourself a snow tube.

You can buy a great range of snow tubes from Amazon

Hints and Tips on using Sledges and Toboggans

First you need a hill that is steeper than 30 degrees, and have snow on it.
Whatever sledge you get, you will need to be able to steer it. If you are sitting on your sledge, you can use your feet to steer by digging your heels into the snow on either side of you. Or you can use your hands behind the sledge to steer. There is a misconception that you can steer by leaning. In practice you are more likely to fall off your sledge sideways.

The most important thing is stopping. Use both feet to stop by digging your heels into the snow. Make sure you can stop before the bottom of the run. also check that there are no hazards such as fences, barbed wire, roads, water or drops at the bottom of the hill. If you find you cannot stop, bail out before the end by rolling off the back of the sledge.

To make your sledge go faster, you can rub ski wax onto the runners on the bottom of the sledge. The ski wax makes it go faster. Candle wax does not have the same effect.

There is so much choice when buying a sledge. Here is a list of the best sledges on the market

Get yourself a sledge now before the shops run out again this year.

If you want some all round fun, try snowtubing in an inflatable inner tube.

Any cookies that may not be particularly necessary for the website to function and is used specifically to collect user personal data via analytics, ads, other embedded contents are termed as non-necessary cookies. It is mandatory to procure user consent prior to running these cookies on your website.