Climbing is the activity of using your hands and/or feet to ascend a steep object. It is pursued both recreationally, either to get to a destination otherwise inaccessible, or for its own enjoyment, and also professionally, as part of activities such as maintenance of a structure, or military operations.

Climbing activities include the following:

Rock, ice, and tree climbing have a common feature: all three normally employ ropes for either safety or aid. Pole climbing and rope climbing were among the first exercises to be included in the origins of modern gymnastics in the late 18th century and early 19th century. The sport of Mountaineering usually requires rock and/or ice climbing. 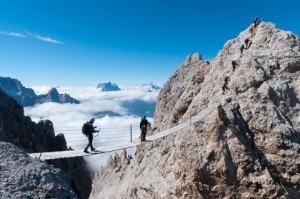 Climbing has been featured in many popular movies, such as Cliffhanger or Mission: Impossible II, but save for a few exceptions (The Eiger Sanction and Touching the Voidbeing examples) it is generally given an inaccurate portrayal by Hollywood and much of the popular media. The sport of rock climbing was swept up in the extreme sport craze in the late 1990s which led to images of rock climbers o­n everything from anti-perspirant and United States Marine Corps commercials, to college promotional materials. Both pole and rope climbing can be seen in circus performances, such as Cirque du Soleil. The Czech republic and France have resurrected the sport of rope climbing – o­nce an official gymnastic event in the Olympic Games, but dropped after 1932- and contests are held in public gathering places, such as shopping centers, as well as in gymnasiums. Pole and mast climbing were popular in the 18th and 19th century in village festivals in certain parts of Europe, and were still part of the physical education curriculum at the United States Naval Academy in the 1960s.

Find Out More about Climbing

If you want to find out more about climbing, visit the British Mountaineering Club website.

Any cookies that may not be particularly necessary for the website to function and is used specifically to collect user personal data via analytics, ads, other embedded contents are termed as non-necessary cookies. It is mandatory to procure user consent prior to running these cookies on your website.